A dense, brownie-like cookie. A dark chocolate cookie-like brownie bite. How about a deep dark chocolate brookie bite? Whatever you want to call them, these miraculous treats go way deep with the chocolateyness. Small in stature but bold in flavor, these dense flourless cookies are gluten-free, egg-free, sugar-free, nut-free, vegan, paleo, and probably other-diets-I’m-forgetting-about friendly. Sweetened with a little stevia, these are yet another ultra-indulgent tasting treat that’s extra low on the guilt-factor. 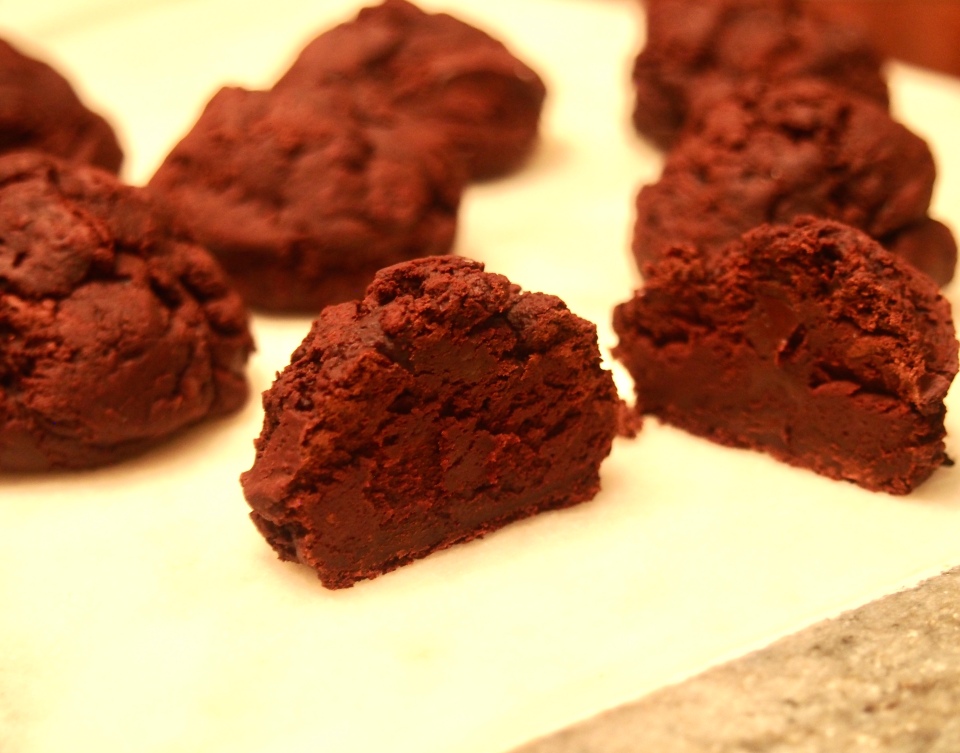 Baking adventures in my former life

I used to made the original sugar-laden version of these flourless cookies back in the pre-diagnosis days when I didn’t have a single health care in the world or dietary restriction to consider. In my previous life’s baking adventures I transitioned to organic as much as possible, whole wheat flour when it made sense, coconut oil whenever I could, flax eggs in oat-based recipes, coconut sugar in lieu of white, and organic powdered sugar when granulated wouldn’t work. But truthfully, I didn’t have a personal need to test alternatives, so when it came to trickier recipes with specific ingredients, I didn’t venture beyond these basics and generally stuck to the traditional ingredients they called for.

These flourless deep chocolate cookies were one of those trickier, I’m-not-gonna-mess-with-this recipes. While skipping the flour is inherent to these gems, the original recipe called for 2 cups of powdered sugar. Delicious? You bet. And then some. Taking a bite was like starting a party in your mouth.

But guilt-free treat? Not so much. Not with all that powdered sugar. Coconut sugar does not render the same truffle-like effect, and even with a few nutrients and a lower glycemic index, coconut sugar is still sugar. As are honey and maple syrup. I’m sure they would all make for delicious renditions of this cookie, and maybe I’ll test them in the future. But this project is all about pure, sugar-free treats. The original recipe also calls for three egg whites, so it’s not vegan-friendly and flax-eggs most certainly wouldn’t do in a recipe like this.* So I stuck to the tried-and-true and deemed it too tricky to make both vegan and sugar-free. Until today.

Truth be told, I did try to take the easier road first and sub a sugar-free alternative for a granulated version of the cookie. I made them. I tasted them. They didn’t come out as soft and gooey as the originals, but they sure did come out tasty. But let’s be honest: Cheez-its, french fries and Reese’s are pretty darn tasty too; the problem here was that the sugar I used was Erythritol. I didn’t do careful-enough research. I didn’t check the bag closely enough when I picked it up off the grocery shelf.

How did I, queen of ingredient-checking, miss this? Each trip to the middle aisles of the grocery store has me closely examining the labels of each product I pick up, often resulting in me replacing the item and walking away. I guess I was in a rush and so set on a simple solution that I saw ‘organic’ and blinded myself to the fact that this sugar-free one-for-one sugar substitute is actually really not good for us, organic or not. Erythritol and any other substances ending in ‘-tol’ are sugar alcohols that often cause GI issues such as gas, cramping, bloating and diarrhea, allergic reactions, and are often loaded with GMOs. Some natural foods contain small amounts of erythritol, however most is manufactured from corn starch, which is highly contaminated with GMOs. So basically, it’s not natural. Just stay away. Lesson learned. No cutting corners.

But after three no-bake chocolate recipes in a row, I needed a cookie recipe. Because baking is just in my DNA. So it was back to the drawing board. With so much sugar called for in this recipe, it was super tricky to come up with a workable alternative ingredient list, along with appropriate quantities, but I was determined. Baking is both an art and a science – eggs and sugar both serve chemical purposes in the baking process. There’s the issues of bulk and binding and leavening and so on. For this recipe, the bulk was the biggest factor – I couldn’t simply cut a cup or two of sugar, replace it with a teaspoon of stevia and get on with it. I had to research, plan and tweak.

And I have to say, the end result was worth it. Is it a perfect match? No. But it’s treat worthy of the truest chocolate lovers. And, I discovered the magic of Aquafaba. Aqua-what? Is this a made-up food? Yeah, I thought that when I first came across this mythical-sounding egg substitute. It’s a recent discovery that was a complete game-changer for vegans – the world of vegan cuisine was suddenly changed forever. No exaggeration.

Aquafaba is chickpea brine. Yes, the liquid that you pour out of a can of chickpeas. This stuff is actually a thing of miracles in the world of vegan cuisine. No joke. Chickpea juice. The first time I read about it I made a face at my computer screen like this be cray and went on with my day.

But this cookie mission elicited a second look. And it’s legit. Chickpea juice, or Aquafaba, fluffs up just like egg whites when you beat it with a mixer. I stood there, watching it transform before my eyes. It actually worked. I was so transfixed that I forgot to take a picture. All of a sudden, the vegan, sugar-free version of this cookie was just one step away from reality.

I got to work bulking up. A little extra of this, a few more tablespoons of that – I was confident enough to move forward. And voila – this dense vegan, gluten-free, sugar-free, nut-free, truffle-brownie-cookie was born. Did I mention these are incredibly dense? I love deep, dark, dense chocolate, but this particular recipe is for true lovers of intense chocolate. 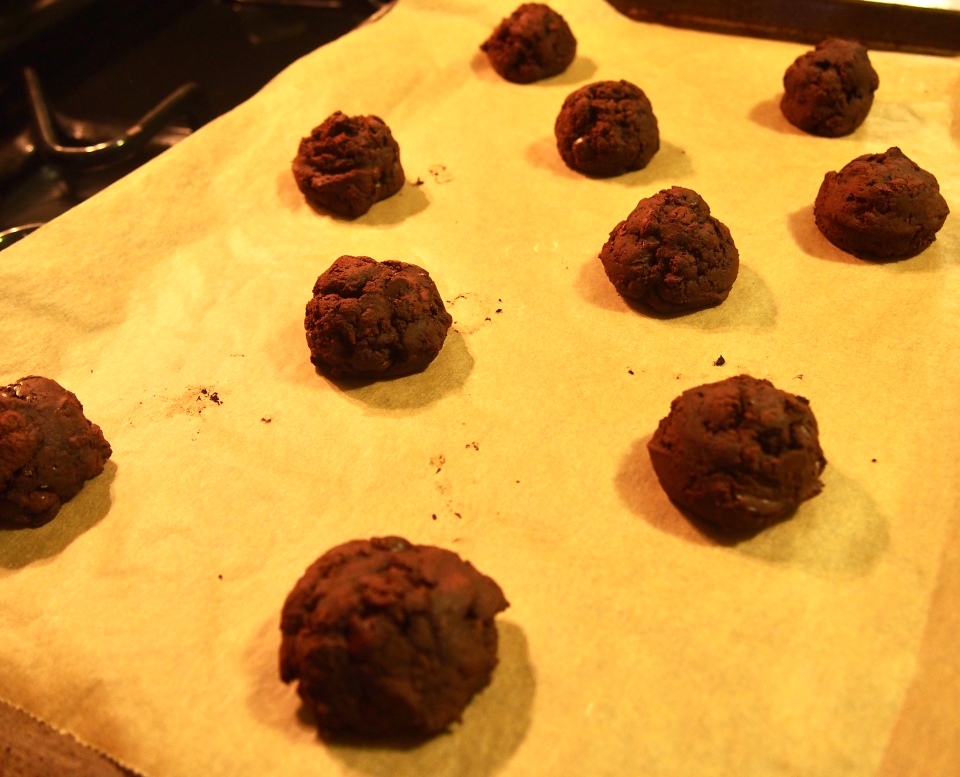 *For anyone not following a vegan diet, organic egg whites are perfectly fine – use 6 tablespoons .

**Or chocolate brand of choice, bearing in mind most others contain sugar.

Your message has been sent. We'll contact you shortly